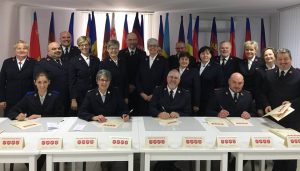 Work was initiated in Russia in 1910 by Colonel Jens Povlsen of Denmark but circumstances necessitated his withdrawal after 18 months. Army operations then recommenced in St Petersburg in 1913 as an extension to the work in Finland. After the February 1917 revolution the work flourished, Russia became a distinct command and reinforcements arrived from Sweden. As a result of the October revolution they had, however, to be withdrawn at the end of 1918, leaving 40 Russian and Finnish officers to continue the work under extreme hardship until the Army was finally proscribed in 1923.

Salvation Army activities were officially recommenced in Eastern Europe in July 1991, overseen by the Norway, Iceland and The Færoes Territory with the arrival of Lieut-Colonels John and Bjorg Bjartveit. It became a distinct command in November 1992. Under the leadership of Commissioner Reinder J. Schurink, the work was extended to Ukraine (1993), Georgia (1993) and Moldova (1994). The Army commenced work in Romania in 1999. On 1 June 2001 the command was redesignated the Eastern Europe Command. It was elevated to territory status on 1 March 2005. The final stage of registering ‘the Moscow Branch of The Salvation Army’ was completed in April 2009.

2015 brought about a significant change in the structure of The Salvation Army in Eastern Europe with Russia becoming a separate command and the EET establishing its headquarters in Chisinau, Moldova, overseeing the work in Romania, Georgia, Moldova and Ukraine.

Languages in which the gospel is preached: Georgian, Moldovan, Romanian, Russian, Ukrainian

Periodicals: Vestnik Spaseniya (The War Cry), The Officer (both Russian).

The territory welcomed General André Cox and Commissioner Silvia Cox (WPWM) as they embarked on a tour of Romania, Moldova, Ukraine and Georgia. During this time, they led officers councils and meetings where many made decisions for Christ, commitments to soldiership and responded to the call for officers. The international leaders also visited a homeless feeding programme, witnessed the night-time work of the emergency medical assistance service on the streets of Bucharest and went to Moldovan village with the mobile medical clinic.

Integrated mission training and implementation have been a focus of the territory and through this many opportunities have unfolded to engage people with the corps and projects. As a result, some of them have become regular visitors to Sunday worship and other have been enrolled as soldiers.

Brengle for officers and soldiers was a particularly special occasion with guest leaders Commissioners James and Jan Condon. Delegates came from northern, central and eastern Europe, Finland, the Czech Republic, Russia and Kaliningrad.

As part of a project, the territory has employed an antihuman trafficking officer. Through this development, leadership hopes to significantly raise awareness of trafficking as well as continually upgrading its strategy in this area.

The official launch and live-streaming of the Territorial Mission Strategy plan was an exciting event. The plan was signed by representatives from all countries in the territory, including territorial, divisional, regional and corps leaders and local officers. Through the innovative use of technology, all officers, soldiers and adherents had the opportunity to be part of the pledge and engage with the initiative. The territory has committed to make disciples, increase soldiers, develop leaders and be accountable in all areas. The pledge is seen as a hallmark of ministry.

As part of the commitment to accountability and self-support, four SALVAtex shops (second-hand stores) have been opened in Romania.