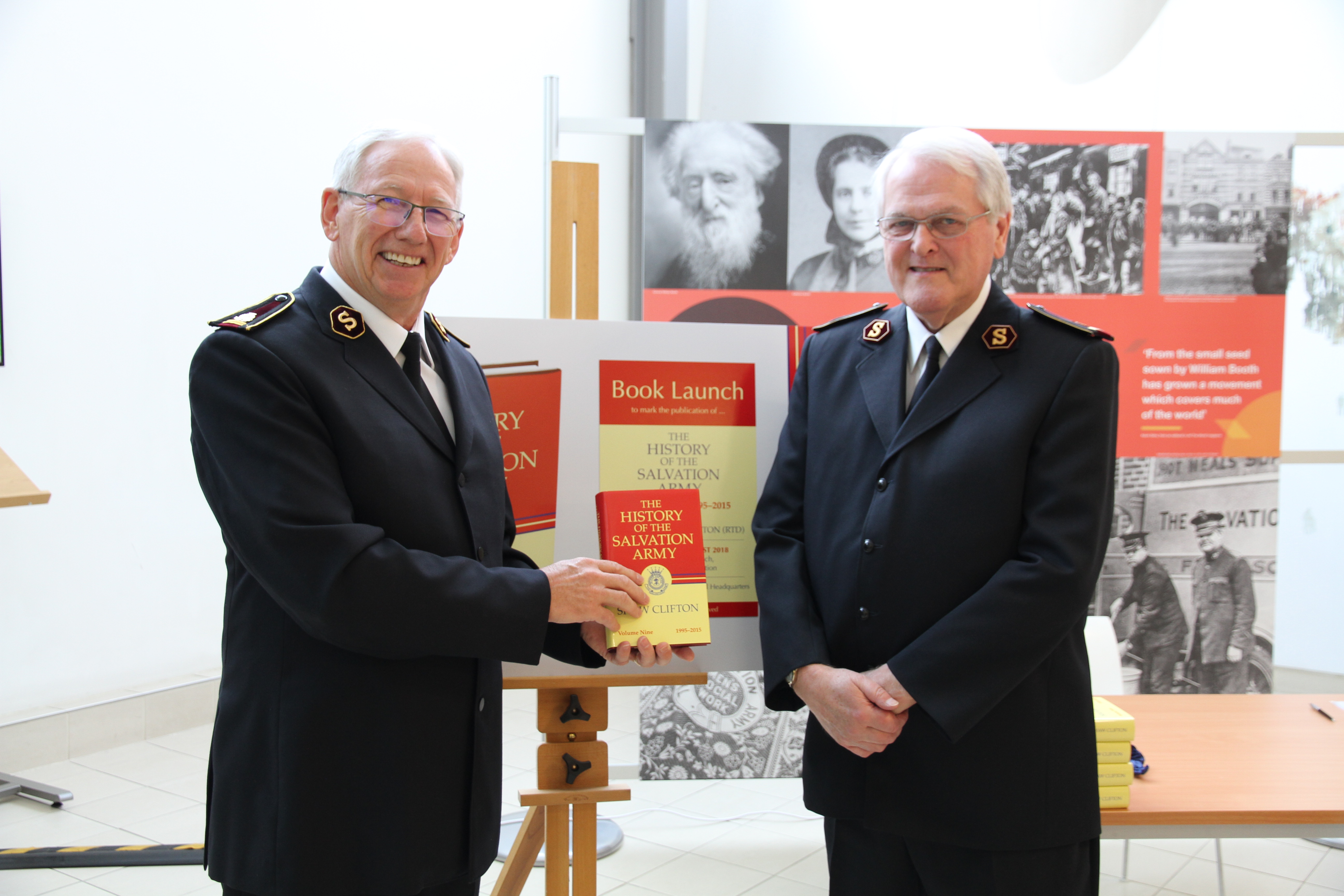 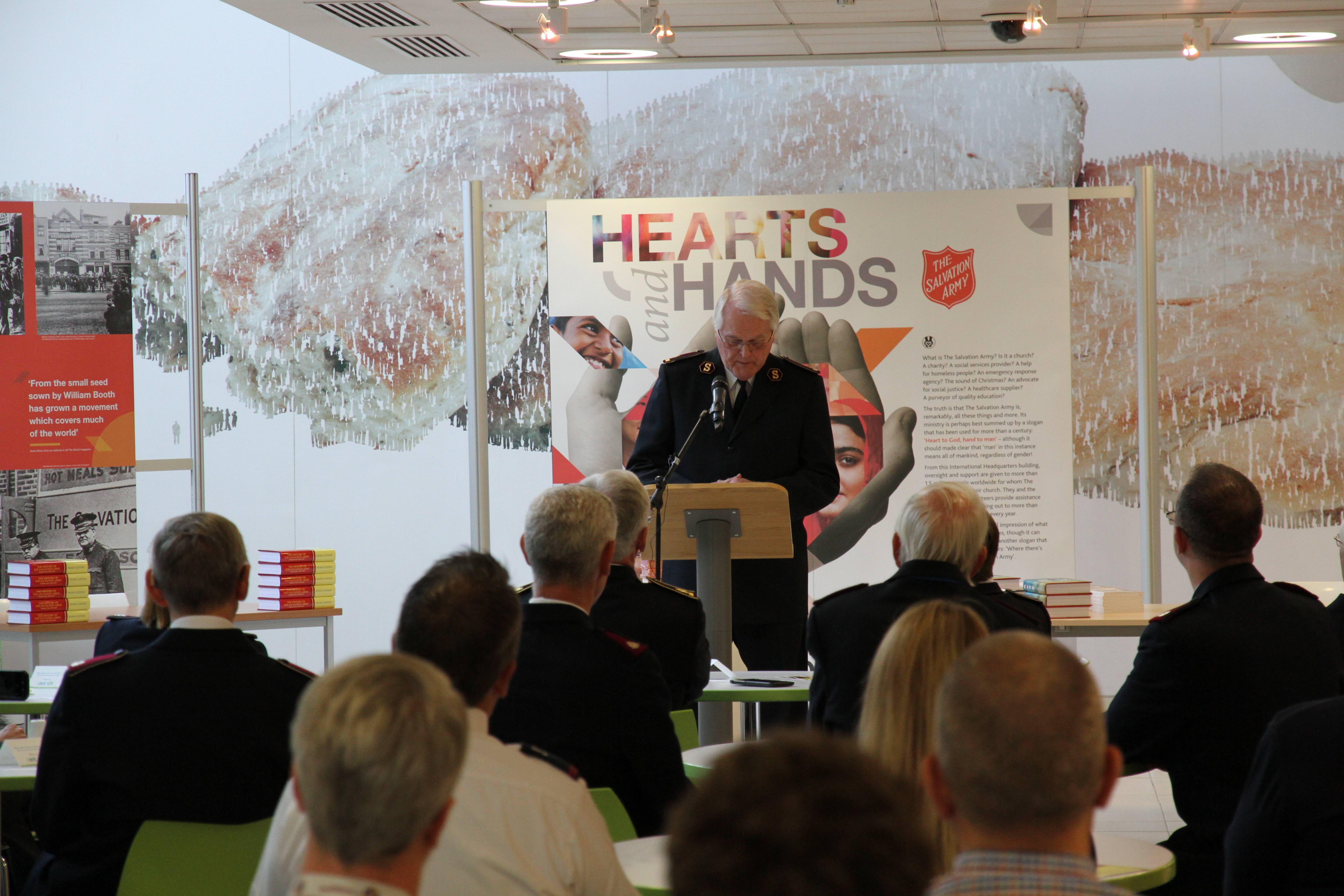 ‘EMOTIONALLY moving’ was a theme that infused the launch of The History of The Salvation Army Volume Nine 1995–2015 at a special gathering at International Headquarters on Thursday 30 August 2018. Following a warm welcome from General Brian Peddle, the author, General Shaw Clifton (Rtd), spoke passionately about the process of distilling 20 years of Army history into the new book, and about the effect so many inspiring stories of Salvation Army ministry had on him.

By way of illustration, General Clifton read an excerpt from the book – an example of selfless service by then-Captain Suresh Pawar, a Salvation Army officer stationed in India:

‘On the outskirts of Bombay, a young Hindu woman lies on the ground, dying of Aids. Her family and neighbours will not touch her. Left alone, she is very ill, weak, dirty, without hope. The Salvation Army Aids team hears about her. Captain Suresh Pawar and his team members from The Salvation Army hospital drive out and pick up the woman, but the staff at the municipal hospital will not touch her. So then and there Captain Suresh bathes her in a hospital room, puts on bandages, goes home and fetches some of his own wife’s clothing and dresses her. The nurses and other staff have never seen an Indian man do such things. Later his wife comes too and talks with the woman. They pray with her. She says, “I have never heard the name of Jesus but I have heard of Ishwar (Mighty God) and now I have seen him in you. I want to follow your God.” The nurses begin to go near and care for her. A few days later, she dies – in Christ.’ 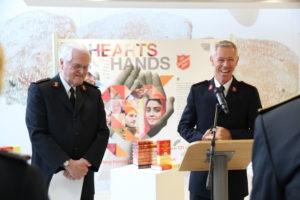 General Clifton recounted: ‘I felt deeply moved as I recorded this … it will be a lasting testimony to the Christlike spirit of those Indian officers and workers. More than once in the last three years, my spirit has been moved as I discovered – and rediscovered – the fidelity of my fellow Salvationists.’

The project to compile the ninth volume of The Salvation Army’s official history began nearly three years ago, at the initiative of former IHQ Communications Secretary Lieut-Colonel John Murray. General Clifton also paid tribute to Major Richard Gaudion, who had undertaken the role of his Private Secretary for two years during his tenure as territorial commander of the United Kingdom Territory with the Republic of Ireland, and for a further five years throughout his time as General. ‘His input on the book has been beyond price,’ said General Clifton.

IHQ Managing Editor and Literary Secretary Paul Mortlock was praised as an ‘exceptionally gifted compiler of book indexes [and] having a tidy, logical mind.’ General Clifton additionally acknowledged Lieut-Colonel Rob Garrad, Executive Secretary to the General, for his ‘comradely help and … unfailing patience’, and saluted the ‘unfailingly helpful’ Lieut-Colonel Patrick Booth, former IHQ Legal Secretary. The ‘ready and gracious input’ of retired Generals Paul Rader and John Larsson was appreciated, with special thanks to the ‘global research team’ that had ensured the book’s completeness and correctness. His wife, Commissioner Birgitte-Brekke Clifton was also commended as an ‘unending source of encouragement’. 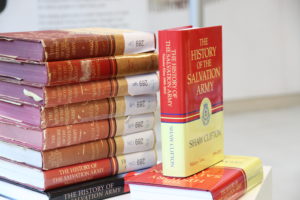 Commenting on his research for the book, General Clifton observed that during the twenty years in review, The Salvation Army ‘opened fire’ in 24 new countries. ‘The Army I found … was the Army I have always known and admired, made up of ordinary but Holy Spirit-filled people. I found Salvationists full of belief in God’s grace and keen to work for him … I found Salvation Army soldiers and officers, of all stations and ranks, with loving, caring hearts and showing compassion in action.’

In conclusion, General Clifton referred to the introduction of his book. ‘I have written just three words which sum up all of its contents and all that is described within its pages. These words are in Latin: SOLI DEO GLORIA – to the glory of God alone.’