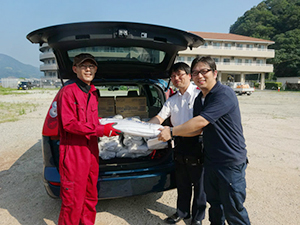 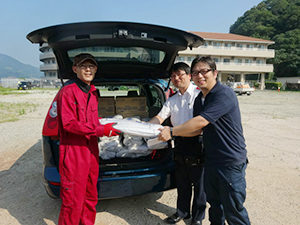 EXCAVATION of thick mud and high-pressure water jetting are among the responses made by The Salvation Army in Kure City, Japan, in the weeks following a typhoon that has been described as the ‘deadliest freshwater disaster since 1982’. Several areas in western Japan were hit by more than a metre of rainfall in less than three days. Flooding and mudslides in June and July were widespread and 238 people have been confirmed as dead or missing, with the Hiroshima prefecture suffering particularly heavy damage.

The Salvation Army’s emergency response in Kure has been centred on removing the muddy debris which has contaminated homes. This has benefitted 2,000 people in the Tennou, Yasuura and Kawajira communities. Further mud, timber and detritus has been cleared away from roads, ditches and drainage channels across the area. More than 2,000 sandbags have also been provided and deployed where necessary to protect properties.

The Salvation Army has been working in partnership with Samaritan’s Purse and the Japan International Food for the Hungry charity as well as 23 local churches and the prefecture authorities. One hundred families have been provided with bottled drinking water and portable plastic water tanks, necessitated by infrastructure failure. Meanwhile, 200 volunteer workers helping to clean up the community have been issued with healthcare kits containing dust masks, gloves and cooling packs to help counter heatstroke. Supplies of rice have also been distributed in the community.

Children and young people are often particularly affected by disasters such as this, and The Salvation Army’s day nursery and girls’ home in Kure have been providing additional care to around 60 children.

Other communities have also been assisted by Salvation Army emergency workers. Clean water has been supplied in the Kawiri, Onomichi and Tengzhou districts. Sanitary items were delivered to authorities in Kurashiki City for distribution where appropriate, and disinfectant sprayers have been deployed in the Osaka region.

The Salvation Army will continue to provide practical, emotional and spiritual support in the flood-affected areas as communities rebuild their homes and livelihoods.