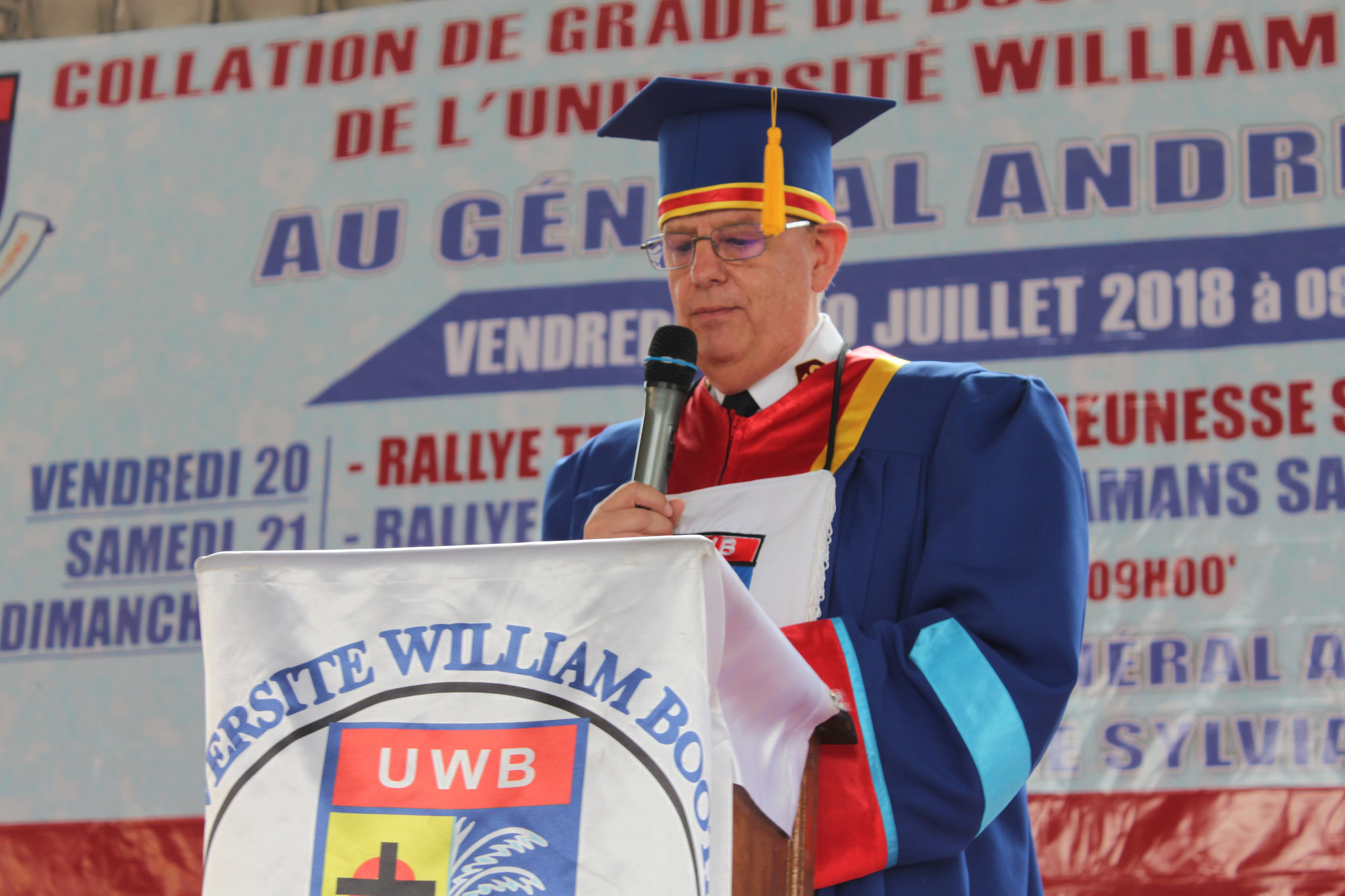 London, 31 July 2018/IHQ/ – AS was appropriate for his final overseas visit as The Salvation Army’s international leader, General André Cox’s time in the Democratic Republic of Congo Territory contained a number of significant events, including the presentation of the Army’s highest honour and the awarding of an honorary doctorate. 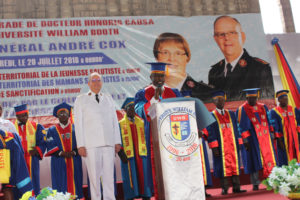 The party at Kinshasa Airport to welcome the General and Commissioner Silvia Cox (World President of Women’s Ministries) included territorial leaders, Kinshasa Staff Band and timbrelists. The General told those gathered that it brought him great joy to return to the Democratic Republic of Congo (DRC). ‘This is a great celebration,’ he said. ‘Let us rejoice!’

On Friday, William Booth University granted the General the title of Doctor Honoris Causa – an honorary doctorate degree. The ceremony was attended by Salvationists, university staff and guests including members of the Government, most notably Steve Mbikayi, Minister of Higher Education and Universities.

Following the award ceremony the General launched Salvationist University Radio and Television. Through a channel available in Kinshasa and across the Republic of Congo, the new programmes created by RTUS will promote Salvationist values, publicise the activities of the church, share Salvationist and Christian music, and produce training content for the university. The General said that the new channel should glorify God through its programmes. 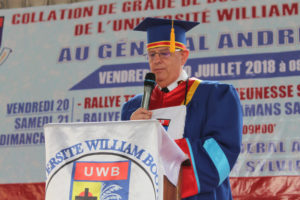 A busy day of activities also included the territorial youth rally, which was held in The Salvation Army’s 80th Anniversary Hall. The General praised the young people for their extraordinary talents, and acknowledged that they are the Army of today, not just the Army of tomorrow. During the rally Commissioner Cox enrolled 102 junior soldiers.

On Saturday, at a women’s rally led by Colonel Marie Lamartinière (Territorial President of Women’s Ministries), Commissioner Cox gave the Bible message. She encouraged the women present to serve God alone, and to belong wholly to him. The General attended the men’s rally, where he spoke about the incredible love of God who desires relationship despite man’s wilfulness and imperfection. God wants to change and transform our nations, he said, but that process commences with each individual.

Sunday began with a march of witness on Kasai Avenue in Kinshasa. Salvationists and people linked to The Salvation Army from across the country, led by Kinshasa Staff Band, passed podium to salute the international leaders. Among the marchers were representatives from Women’s Ministries, health services, scouts and young people, with staff from a dental clinic carrying a large set of dentures to show how the clinic teaches people to brush their teeth! 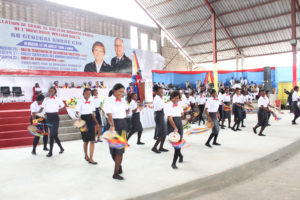 The previous day, the General and Commissioner Cox had attended a gathering for the doctor’s family and medical colleagues. Other attendees included Swiss Salvationists who had worked with Dr Nku. Tributes were paid to the doctor’s faithful ministry in God’s name to the people of DRC.

At the holiness meeting, Commissioner Cox reminded the congregation that, whatever troubles people might face, the Lord offers peace. The General enrolled more than 70 soldiers before offering prayer on their behalf.

In his Bible message, the General called for Congolese Christians to find hope in Jesus Christ, whose love is infinitely perfect. He also shared the secret to lasting peace: being attached to God.