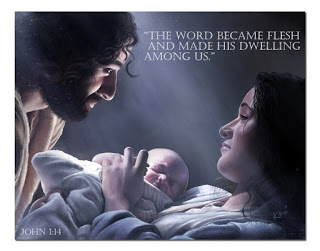 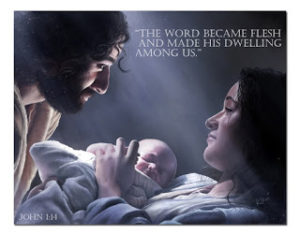 When we read the stories of the Old Testament, it is not difficult to see how God is moving in and through his chosen people, and how he also reveals to them what his plans are. The author of the letter to the Hebrews has captured this and described it in this way:

In the past God spoke to our ancestors through the prophets at many times and in various ways, but in these last days he has spoken to us by his Son, whom he appointed heir of all things, and through whom also he made the universe.
Hebrews 1:1-2

The belief that Jesus Christ was present in God – the ‘first mover’ – when the world was created, was very important for the first followers of the Way, who later were called Christians. When God became flesh, his presence and identification with his creation became even more evident. God was not just a distant Creator, but lived as a human being among ordinary people, “tempted in every way, just as we are—yet he did not sin” (1).

The prophets saw that this would happen, and Isaiah described it in this way:

For this is what the high and exalted One says—
he who lives forever, whose name is holy:
“I live in a high and holy place,
but also with the one who is contrite and lowly in spirit,
to revive the spirit of the lowly
and to revive the heart of the contrite.
Isaiah 57:15

Therefore, the birth of Jesus Christ is so vital for the Christian faith and for the momentum of God’s plan of salvation. In the incarnation the first mover is giving his creation a new move. Some of Jesus’ last words were: “Go therefore…”

– If we do not grasp the mystery of the incarnation, but still want to do what he asks us to do, we are likely to try to move but with the parking-brakes on. More about incarnation in the reflection on the ‘third move’ next week.

I move because He is with me always (2)