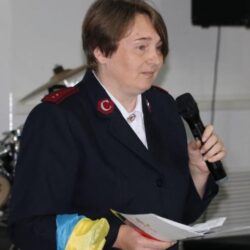 Captain Svetlana Bochkareva is the corps officer at Pesochin, a suburb in Kharkiv, Eastern Ukraine, only 40km from the Russian border. This city has suffered relentless missile strikes, drone attacks and shelling since the Russians invaded Ukraine on 24 February. Critical infrastructure has been destroyed, and much of the city lies in ruins. Thousands of[…]